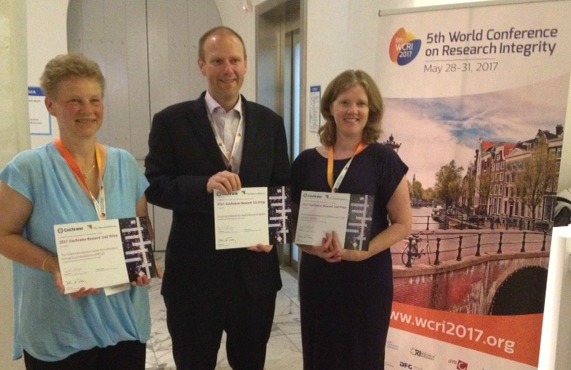 Representing the three winners of the inaugural Cochrane-REWARD prize 2017 (Left to right) SYRCLE, NIHR and the COMET Initiative

The ceremony to award the first Cochrane-REWARD prizes for reducing waste in research took place at during the 5thWorld Conference on Research Integrity in Amsterdam on 30 May 2017.  Given the high standard of the 18 applicants, the panel decided to award three prizes recognising local or pilot initiatives that could lead to reductions in research waste.  This year’s winners were, in first place, the Adding Value in Research programme of the UK National Institute for Health Research (NIHR), and in joint second place the Systematic Review Center for animal Experimentation (SYRCLE) in Nijmegen, Netherlands, and the Core Outcome Measures in Effectiveness Trials (COMET) Initiative coordinated in Liverpool, England.

NIHR’s Adding Value in Research programme aims to ensure that research funded by the NIHR addresses questions that are relevant to clinicians, patients, and the public; uses appropriate design and methods; is delivered efficiently; results in accessible full publication; and produces unbiased and usable reports. It, therefore, matches the key goals of the REWARD campaign in tackling waste at every stage of research. Examples of activities promoted by the programme include requiring funding applications for primary research to reference systematic reviews showing what is already known on a topic; ensuring NIHR-funded research is fully reported; and involving patients not only on funding committees but also in monitoring trials.

SYRCLE undertakes teaching, coaching, and research about systematic reviews of animal studies. These activities are designed to improve the reliability of laboratory animal research and its relevance for patients. Systematic reviews help to make existing evidence more transparent, prevent duplication, and identify knowledge gaps. Since commencing the systematic reviews of animal studies, Radboud University has seen a 35% drop in animals used, and the Netherlands a 15% drop. Started in the Netherlands, SYRCLE is building a global network of ambassadors to promote its work.

The COMET Initiative brings together people interested in the development and application of agreed standardised sets of research outcomes, known as ‘core outcome sets’, relevant to health service users and clinicians. These outcome sets represent the minimum that should be measured and reported in all clinical trials of treatments for a specific condition, and can also be used in clinical audits. Use of COMET’s core outcome sets facilitates comparability of trials and use in systematic reviews. Importantly COMET has two current initiatives: (i) a funder (NIHR) requests trial applications check and refer to COMET, and (ii) with a trials registry (ISRCTN) to provide advice at the time of registration.

The Cochrane-REWARD Prize will be awarded again in 2018. Details for applicants for the 2018 prize will be announced in late 2017 for submission by August 2018.